Got a question about our furniture relocation services?

Durban is classified as the third richest major city in South Africa, accompanied by its large size and dense population. Durban is bustling and pulsing with business people and tourists alike, common for such a major port city. Durban is a sunny, sea-side city with a very warm climate that attracts many people looking for some fun in the sun. Even though Durban, having one of the busiest ports in South Africa, is bustling with life, it has a very laid-back vibe, making it the perfect spot for people looking for a sunny, relaxing holiday. With hundreds of luxury hotels lining Durban’s beachfront, it’s often regarded as South Africa’s very own Miami Beach. Use a trusted moving company in Durban for all your relocation or furniture removal needs.

Official Languages: Durban is considered home to many people from diverse backgrounds, but the four languages most commonly spoken in Durban include isiZulu, isiXhosa, English, and every now and then, Afrikaans.

Durban has the busiest container port in the whole continent of Africa, having been widened to fit even the world’s largest “super ships”.

Durban has the highest population of Indians in South Africa, and along with the people, they brought along their cuisine that became very popular and loved by all the residents in Durban. The most popular dish, called “Bunny Chow” became a staple food dish to most South Africans.

The Moses Mabhida Stadium, named after a political freedom fight and located in Durban, became the main host for things related to football in South Africa. The stadium can hold up to 70 000 people and is considered one of the most beautiful stadiums in South Africa.

Cost of Moving to Durban

The price of moving to Durban will vary due to a number of reasons:

Moving from Cape Town to Durban?

Moving from Cape Town to Durban can range between R4995 and R12995 all depending on type of move, weight, type of goods, date of move etc. 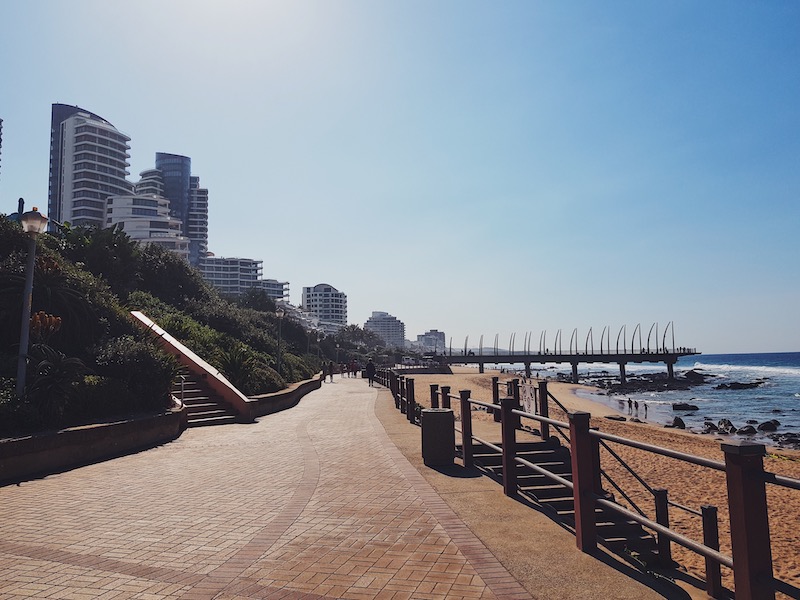 Checklist for Moving to Durban

The best form of public transport in Durban is the People Mover Bus Systems. This is a safer, more efficient mode of public transport compared to other services, due to the fact that it has CCTV monitored buses. The majority of residents in Durban will choose to drive, which means that traffic during the day can be quite congested. Metered taxis are also a great option, just keep in mind that metered taxis will need to be booked in advance to make sure you arrive at your destination on time.

Cost of Living in Durban

Here, we will give a brief overview of how much the average cost of living is for such a major South African city, such as Durban. These average costs are priced to care for an individual living on their own in Durban:

Dinner for two in a local eatery: R370

Dinner for two at an upper class restaurant: R460

One cocktail at a local pub: R56

Weather Forecast Every Month to Help you choose when to Move

There are many different areas in Durban to choose from when making the decision on where to live. It depends on what you want out of the area, whether you have a family and what you need to be close to. Durban has a variety of great places to live and each one boasts its own attractions and set of sights. Below are the top 6 neighbourhoods in Durban.

Durban North is an affluent area close enough to the hustle and bustle of the city, yet sill rural and quiet enough for families to settle down.

Umhlanga is one of the most well known areas in Durban and is very popular between tourists and residents. With stunning beaches, amazing restaurants and beautiful homes, Umhlanga is the place to be.

Glenwood has an awesome artsy vibe to the area and is surrounded by stunning landscapes and harbours. Residents enjoy a more peaceful life, further away from the city but close enough to easily commute.

Musgrave boasts an eclectic mix of old Victorian houses and colourful modern homes all mixed together in this beautiful area.

If you are looking for a lively, virbant area with loads to do, whether its night or day, then Morningside is the place for you. From restaurants, coffee shops and bars, there is plenty to choose from.

The city centre of Durban is one of the most expensive places to live, with the majority of its residents being young working class adults wanting to live in the hustle and bustle of this exciting area.

Durban North is a very affluent area that offers the best of both worlds, being close to the city centre while still retaining some of it’s residential charm. Durban North is a very family-orientated neighbourhood and offers a simpler, quieter life to its residents. With popular attractions such as the Japanese Gardens and the Umgeni River Bird Park, Durban North has many great attractions which are popular among the locals. Between the residential homes there are many great, and convenient, dining and shopping options for those looking to explore the neighborhood and what it has to offer.

If you are looking for a more upscale suburb to call home in Durban, then Umhlanga is the perfect option for you. Umhlanga has always been the slightelier upmarket (maybe even “snobby”?) part of Durban, but for good reasons. Umhlanga is filled with higher end hotels, shops and restaurants, making it a hot spot for tourists and locals alike. Even though Umhlanga is a bit farther away from the city centre, there is no shortage of activities for its residents, including the main attractions of the Umhlanga Lagoon Nature Reserve , the Umhlanga Promenade housing a beautiful lighthouse and some pristine beaches that accompany the neighbourhood.

Cool, quiet and vibrant. Glenwood is a small and leafy suburb, overlooking Durban’s main port and presenting stunning views of the ocean to its residents. Glenwood has many quirky and cool attractions, such as local eateries, art galleries and yoga studios. Glenwood is even known for its graffiti art lining the streets, where residents and tourists can take part in a local “graffiti tour” created and curated by the locals. Along with the man made attractions, Glenwood has many parks for those who enjoy a bit of fresh air, including the Pigeon Valley Nature Reserve and Bulwer Park.

Musgrave is known for its central location, charming guesthouses and architectural gems that makes this suburb a popular destination for locals and tourists alike. Musgrave is an art and history lover’s paradise, where residents can appreciate the spacious and beautiful Victorian and Edwardian homes. Musgrave is close to the city centre, while still offering a more quiet and peaceful atmosphere, making it the perfect suburb for those wanting to stay close to the action. Musgrave even has a monthly “Night Market” featuring handmade local crafts, artisan delicacies and a variety of entertaining performances. In this trendy neighborhood, you can also find the hidden gem of the Durban Botanical Gardens, which is the oldest botanic garden in all of Africa. Musgrave is located just west of Durban’s City Centre, making it the perfect place for families and young folk alike wanting to live the suburban life while still being connected to the city.

Morningside is the perfect “in-betweener” suburb, with a great combination between suburbia and sandy beaches. Morningside is a well known and trendy area in Durban, famous for its hip street; Florida Road. Here, the street is lined with hundreds of amazing pubs, restaurants and art galleries, making it the perfect place for someone who enjoys an exciting nightlife scene. Some other great attractions include Mitchell Park Zoo, the African Art Centre and the Moses Mabhida Stadium, which is known for hosting amazing football matches for those who enjoy watching sport.

Durban City Centres offers residents an abundance of benefits, including having access to reliable public transport and proximity to most of the popular attractions within Durban’s city limits. Here in the city centre, residents will never feel bored or underwhelmed, with popular attractions such as uShaka Marine World to keep the whole family entertained for hours on end. The city centre is also home to popular museums including the Natural Science Museum and the Phansi Museum, a real treasure trove for cultural and historical artifacts. The city centre also boasts many restaurants and shopping centres, along with affordable accommodation, giving you the ultimate city experience without having to break the bank.

Durban offers plenty of employment opportunities and has a much higher capita income than other parts of the country. The average salary for a person working in Durban is around R34k a month. Durban is the second biggest manufacturing area in South Africa, after Johannesburg, also home to the busiest port in the whole of Africa, which makes it a great hub for importing and exporting goods, requiring a lot of manpower and therefore a lot of employees. Another big industry for Durban is tourism, which makes a significant contribution to Durban’s economy. Other industries that are popular in Durban are forestry, automotive and sugar cane agriculture. There are also a lot of opportunities for those working in finance and customer service, as many companies all over the world outsource manpower to companies found in Durban.

Durban offers a lot of different property types and areas to choose from. Beachfront areas offer more apartment style accommodation and are slightly more expensive than properties found in more residential suburban areas. Compared to previous years, property in Durban is selling a lot quicker than usual. The average price of a property in Durban is R1,695,000. In Durban North house prices are more expensive with the average sale price being R3,7000,000, whereas areas such as Phoenix properties go for about R800,000. So, depending on your budget you will be able to find something that works for you.